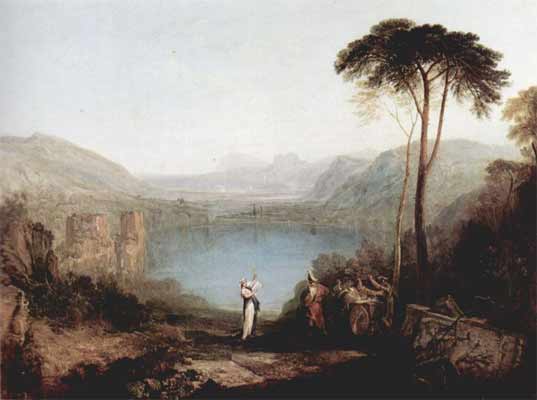 This holiday provided a little fore-taste of what was in store for me in the years to come.

And for him, too, I suppose, to be fair ! He lay for ages in the sunshine on the shore of Lake Lugano, our first stop. Of course, I had enough entertainment looking at him, guarding his sleep.

We arrived late in Milan. He had to have a shower and a cup of tea. The most likely place for this and avoiding expensive hotels, was, according to him, the Main Station ! I would have agreed with anything at all he might have suggested and was willingly driven round a hectic, smelly, hot, unattractive city, just catching a glimpse of the famous cathedral as we happened to pass it, but I was not interested. I only thought that Steve should have his shower and joined in his indignation when the wretched station did not want to come our way. He kept on looking undeterred and I was confident he would find it in the end as we were going round in yet another circle …

The next thing I remember is the first night we spent together – my first night ever with a man ! I did not give it much thought at the time. The day had been long. I had not slept on the shore of Lake Lugano. I was dead tired. Knowing Steve, we must have had a meal somewhere which would have restored his spirits. The fact is that we ended up in the dead of night on some lonely road south of Milan, and Steve suggested we slept there. I could not agree more. The thought of my parents crossed my mind briefly. What a good job they didn’t know ! I did wonder quietly what I had let myself in for : the daughter of a German airforce colonel stranded on an Italian road in the middle of the night, in the company of an Englishman ! It seemed the most unlikely situation. But there it was, and I certainly wanted my Englishman to sleep well. So we cheerfully converted the seats of his little car in a way that we could vaguely stretch out. I was happy and comfortable enough. I could not sleep, it is true, but that did not matter. He was soundly asleep, which gave me great comfort and also courage to wage a battle against mosquitos which came down on us in fair numbers. When he woke up in the morning, he greeted me with a sweet kiss which made me forget this somewhat unusual night. He then suggested that I did most of the driving that day, because he was feeling too tired after a rotten night and was aching all over. I did all I could to make life easy for him. If he thought me capable of driving, surely he must be right. In fact, he felt so well in the passenger seat that he went to sleep pretty soon. I must admit that I was a little frightened, feeling all the responsibility on my weak shoulders. However, we reached the shores of another lake in good time and pitched our little tent.

This tent was the fruit of long deliberations as to the circumstances under which we should spend the nights on holiday. Really a tent was the only financially satisfactory solution. Neither of us owned one; so I offered to borrow one from friends of mine, a couple who had been engaged for a year or two, very respectable, and who had never dared themselves embark on what I was proposing to do. I’m afraid I created a precedent, because when I returned the tent they said they would follow our example next year. My mother, I’m sure, turned the idea of our tent out of her mind. She refused to think about it. We had told her anyway that we would use it only, if there was no other possibility. As for my father, he left these things entirely to Steve and myself.

So we had pitched our tent for the first time, and I was determined not to let things happen which, I understood, were reserved for marriage. Steve looked happy enough out of his blue eyes, and anyway, I let his hands wander.

In this manner we enjoyed ourselves considerably. We went as far south as Sicily, and he found all the good places for mussels and lobsters. Even then I noticed he seemed to find anything he wanted. I took some good photographs of him and adored him in general.

On the camping-site in Syracuse a more momentous thing happened : Steve asked me, if I wanted to be his wife ! I was not immediately dead sure what to answer. How on earth was I to know whether he and I were destined to spend the rest of our lives together ? However, I could not keep him waiting and replied “I think so”, feeling that I had committed myself by about ninety-eight per cent. Steve took my answer for a one hundred per cent one and started thinking about an engagement ring.

On the journey back we were to meet my parents who were on holiday near Genoa. It was an awful long drive north, Steve having left it to the last moment – I was to find out that he always does, but must give him that he has never missed anything yet. His eyes were bloodshot when he stopped driving at 3 am a little south of Salerno. We collapsed on a beach. I gave up my resistance to sleeping out on beaches, took my handbag, which contained all our valuables, for a pillow and slept soundly until 8 am, forgetting all possible dangers. The following evening we arrived at my parents’ an hour late, because I had revealed my inability to read maps, something Steve will have to cope with to the end of his life. Steve had been anticipating his evening meal, talking with great relish about nice big juicy steaks all the time. I made this idea mine and told my parents as soon as we saw them that he must have a steak on the spot. They were dismayed, because the meal they had planned to have with us had veal for a main course – would that do ? I looked at Steve in despair. Where would he get his steak? Should we go to a different restaurant ? It was decided in the end that veal would do.

The next problem to settle was to find a bed for him. My parents had rented a flat with two spare settees. I was having one of them. As for Steve, they had assured the elderly landlady that he would not stay under the same roof with the rest of us. I don’t know what story they had told her in the first place about me and the young man I would turn up with. My parents suggested that Steve spent the night in a nearby hotel. I pointed out the expense, an argument which does not easily fail with my father, and it won him over this time, my mother giving up her resistance, too. We prepared his bed, not in one room with me, of course, and I told my mother that we would probably become married. She opened her eyes wide with concern “what do you mean: probably ?”. I hastened to reassure her that we were serious about getting married, thus committing myself one hundred per cent, and from then on she adopted Steve for her second son-in-law.

Steve visited me several times in Tübingen, a place which reminded him of Durham where he had been to university. Fittingly enough, Durham and Tübingen Universities are twinned. He brought me a very fashionable mini-kilt from England and henceforth I was known as the “Fräulein mit dem Mini-Rock” (the use of surnames then prevailing, even among students). He introduced me to new food combinations like “sausage and onion” or “beetroot and cheese”. I hastened to have these delicacies ready for him when he came. Onion was new in my life. My mother never used it, because my father claimed it did not agree with him. I think times have changed for my father, I’m afraid. Too much has been said about onions being “good” for us. She now slyly mixes them in, hiding them in cereals and mashing them up in sauces or other vegetables.

I asked Steve to speed up the ring-business, so that it would be visible to others that I was not free any more, there being one or two around. In my country, all you have for an engagement ring is the wedding ring worn on the left hand, before it is transferred to the right on getting married. I wondered about the pros and cons of different customs and then settled on the English one. The ring I received was the most valuable item in my family and caused great admiration wherever I showed it.

Steve lived in Paris at the time, and I visited him there once, staying with him in the same hotel room. He cunningly pointed out that we were doing it under false pretences, not doing what people would normally expect one to do under the circumstances …

My French finals were coming up. I had two months to prepare the oral. Would I be able to cover all the ground ? Steve suggested to go on holiday for a fortnight. I was appalled by the idea. I turned it down. This was the very last thing that would have come to my mind. I had to stick it now and study as hard as I could.  Then I felt sorry for him; he was disappointed. Of course, he was English, waiting patiently, and when I did come round in the end, not before having been counselled by a friend, he was not surprized, booked two flights to Athens, and we had a wonderful time on some Greek islands.