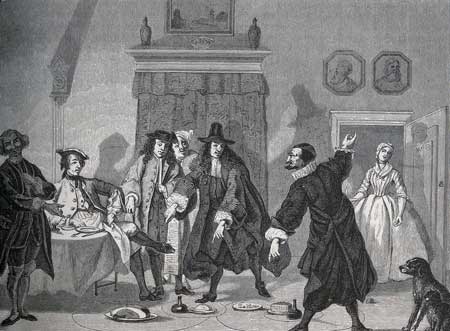 I have the reputation of being a food fadist, my fault, I suppose, for spreading the rumour, on our arrival, that sugar, white flour, meat and chemicals are bad for us. Anyway, in the course of the years I have learnt not to worry nor to talk too much about these things any more. It is amazing, though, how a reputation once acquired clings to one. People do not forget and feel I should live up to it consistently, and if I do not mention this particular subject, they will do it for me.

Conversation with Mrs May Beetle :

Dag : How nice Jen can go to Wales with G. and stay on the farm with him. I’m all for it.

Mrs May Beetle : You’ll have a food problem…

Dag : I won’t. I’ll tell her to clean her teeth after meals. It’ll only be for a fortnight, anyway.

Mrs May Beetle : You’ll be pleased to hear the owner is a vegetarian.

Dag : Is she really ? I’m not worried. Jen can have meat if she wants to.

Mrs May Beetle dropped the subject.

Her husband gave me a basket of gorgeous fruit on my birthday. “Here is something for your taste, I hope”, he said. I expressed my delight, praised the beautiful arrangement and told him I would have all the grapes before the children came home. He was just leaving the room and turned round, saying “I thought this would be something you could eat”. I was glad he did not remember that I am not supposed to like chemically treated food either. My husband did when he came home that day.

I enjoyed this fruit very much on my own and in the evening told Steve about it. He was disappointed there was not even a sample of these delicious grapes left for him and then accused me of being inconsistent “you should not eat these things, they’re treated !”. I told him I had changed my attitude. He called me wicked. I’m not sure whether he was serious or not.

Dag : I’m writing down childhood memories and experience in England.

Mrs Rivers : How interesting. No doubt you’ll be writing about the food you’ve been having. Just look at your children. They’ve all had the same food, and how different they are !

Some people smile at me from their superior position as an expert in organic chemistry. What is this charming little housewife worried about ? He does what he can to reassure me. A few chemicals won’t do any harm. I should look at him, still alive after a long career with them !

A vegetarian diet, on the other hand, so he says, can by no means supply all the nutrients needed. Plenty of meat is important as far as he is concerned. And green vegetables, brussels sprouts preferably. No food fadism, please, no doctrines, especially about raw foods and salads which he detests. Simple meals consisting of meat, potatos and brussels sprouts – that is what he likes. And a pudding, of course. Anything else or different makes him shudder with apprehension, especially anything “fancy” which people serve at parties. The very idea gives him stomach ache. He loathes cheese. But the worst of all is shellfish. He has a gruesome story to tell of some oysters he was forced to eat in Paris once. He felt himself turn pale as the plate was put down in front of him, but made a heroic effort, desperate to oblige his hosts, closed his eyes as best he could, mustered all self-control and … swallowed the things. He felt shocking afterwards and even worse when he heard from another guest that this latter had turned down the oysters on the grounds that he did not like them and had had something else instead. In the ensuing night my friend was taken seriously ill. He was sure his system was shaken by food poisoning, feeling hot and cold in turns, trembling like a leaf and a number of other worrying symptoms. He could not sleep a wink, was as pale as death in the morning and in this state had to give a lecture. All because of a few oysters. He did not hear that anyone else had been taken ill and they had all had the same food. This was immaterial, though. He for one knew that he had had food poisoning from those oysters.

Poor man ! He has been worried stiff about eating in other people’s houses ever since. The other day he had had indigestion when unable to avoid curried chicken on a posh party. Of course, his devoted wife had the same complaint. When he comes to our house, I must see to one thing : have my cakes sweet enough – and he will praise them. Sometimes I think all he can taste is sweetness.

His wife knows sugar is not good for us and tries to cut down his consumption. To compensate the effect of sugar on his system he takes yeast tablets. He is a chemist and has the advantage of knowing how our metabolism works.

I understand from his wife that he has what is known in my country as “squirrel” instinct, manifesting itself under certain circumstances. For example last time the dockers were on strike he insisted on his wife stocking up with large quantities of any foods that keep well, especially sweet ones, like dried fruit which owing to its natural sugar content keeps very well indeed. Needless to say, his coal bunker holds a supply for two years.